‘The Tale of the Rose : The Love Story Behind The Little Prince’ by Consuelo De Saint-Exupe`ry 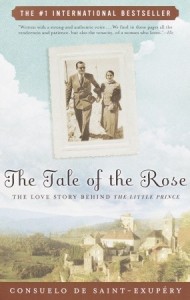 If you have read the “The Little Prince‘ by Antoine de Saint-Exupery and felt sorry for the boy who pined for his Rose, you are in for a rude shock. As the title suggests, this is the story of ‘The Rose’ as told by her.

Twice widowed Consuelo meets the aviator Antoine in Buenos Aires and before she can even think of what is happening, gets caught up in the whirl wind world of romance and subsequent marriage to him. The story takes us through their tumultuous lives from  Paris to Casablanca, back to Paris , then to her home in El Salvador and finally to New York.

Antoine comes across as totally self centered and selfish, looking only at what he could get out of the relationship. It wouldn’t be an exaggeration to say that but for Consuelo, most of his much acclaimed literary works may not have seen the light of the day or even been completed. One moment he treats her as though she is the biggest treasure that he has come across, the next as if her very presence would poison him. The callous nature in which he carries on his various affairs right front of her is shocking, to say the least. But, the very moment he gets even an inkling of her intention to leave him, the jealous serpent in him raises itself. By fair means and foul, he ensures that Consuelo doesn’t leave him.

Consuelo herself seem to be at a complete loss as far as her beloved Tonio is considered. She knows he is treating her worse than a doormat, but is ready to fly back to him at the slightest hint. She is literally  banished from his life several times, left stranded penniless and home less in strange towns and even goes through multiple nervous break downs. At the end of it all , she is back at his door step , trying to bring some order into his completely disarrayed life. Is it some sort of heroinism, I wonder, that she thinks she alone is capable to tame such a wild and gifted heart? The essence of their life together is brought out in her words,

What Antoine looks for in his wife is also clear as he leaves her before his final flight,

“I could almost thank heaven for giving me a treasure to leave behind: my house, my books, my dog. You will keep them for me.”

The book reinforces some questions that I have always had. Is promiscuity a pre-requisite for genius and an artistic bend of mind? There are so many instances of first wives supporting writers and artists while they are struggling and at the first sign of success they are relegated to the post of a shrewish woman. And the man is pitied and spoiled with pity, love, lust and whatnot.

Verdict – Would not recommend it…unless you are really curious to know about the sad reality  that the ‘Little Prince’ was.