‘The Days Of Abandonment,’ Elena Ferrante

It took me a couple of years to go past a few pages the first of Ferrante’s Neopolitan novels. Once that threshold was crossed, there was no looking back. In two weeks, all four was done and I was totally blown away.

This one took a similar turn, if I may say so. The difference though was each sentence of the Neapolitan four were devoured in detail. The Abandonment was a fast forward in contrast. One fine day, Mario tells his wife Olga that he no longer wants to have a life with her. In the fifteen years they were together, he had given some hints of unusual behavior maybe twice and Olga had believed that all those were behind them. What goes through her and her life in the ensuing days is what Ferrante portrays in this very short book.

The various phases that Olga goes through, the total disbelief, the difficulty to accept, the sheer bewilderment as to what went wrong, the cycle of guilt, the all consuming anger, the feeling of losing her mind, the changing relationship with her children, and finally the acceptance is described in graphic detail.

There is no shying away from the honesty of the protagonist’s emotions. She hates everything and everyone including her children. However, she has no choice but to go ahead with taking care of the home. While the man walks away with a younger woman, without even a thought of how his family will manage, the woman is left to pick up the pieces.

Rooting for Olga right from the beginning, almost shouting at her to get on with her life, I skipped sentences and whole paragraphs even. Ferrante doesn’t disappoint with the depth of her character portrayals. You get angry and depressed in turns, at a point I was wondering why I was going through such torture in the first place. That is where Ferrante’s magic is. She has you in her spell and it cannot be broken until you have turned the last page.

‘Notes To Self,’ Emilie Pine 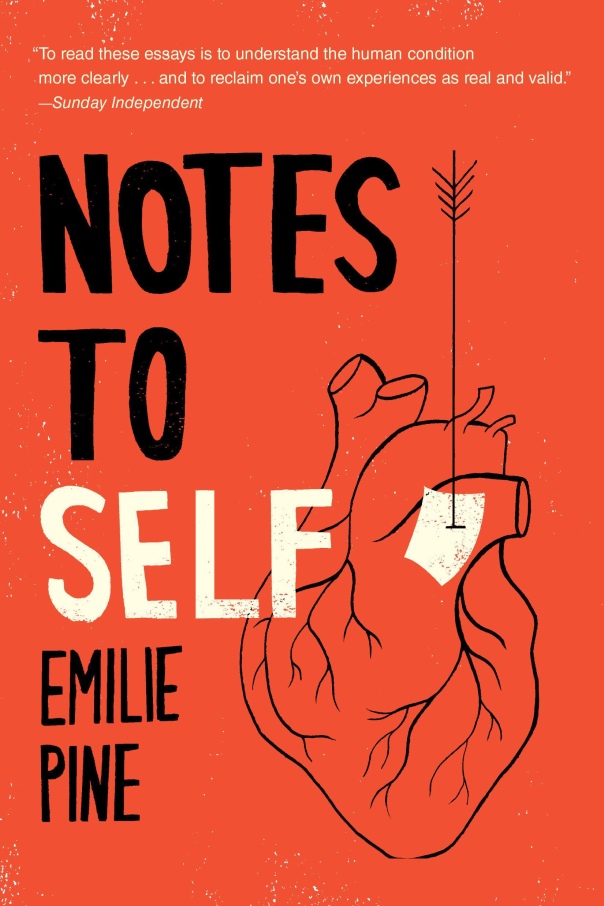 Journaling as a means of coming to terms with her father’s illness and her relationship with her father is what started it all, says Emilie Pine, an Associate Professor Of Drama at the University Of Dublin. An alcoholic father who could never be relied upon, needing his daughters when he is almost on his deathbed. How does one deal with it? The author tries to be as honest as possible, including her dilemma on whether to be even there for him or not. This sense of absolute truth sets the tone for the rest of the essays.

The pain of infertility, the stigma of menstrual bleeding, the difficulty in speaking about separation especially that of your parents, the wild years of her youth, alcoholism, sexual assaults that she experienced and finally on being female in a world that is still predominantly male, she doesn’t spare herself even a bit. To paraphrase her own words, “I wrote a book that I needed to read.”

What does another memoir do? Why read something so visceral? Why was I not able to put it down? What made my heart race through certain pages? As a dear friend once told me, we need to tell our stories so that others don’t feel lonely. That they realize there are others who have gone through the same. And came out strong. That the ones that seem to have it all are the ones that were once beaten up by life. That each of us have a million stories among us. Telling it aloud builds us, as one and as many.

Each page, every word in here is our story. Our thoughts, our angst. We are not alone.

At seventeen, Deya is forced to ‘sit with suitors.’ College is not for well brought up girls of Palestinian origin. She is torn apart between duty to her grandparents on one side and the urge to break free and be her own person on the other. She and her three younger sisters have only faint memories of their parents, who ‘died in a car accident.’ She seem to be on the brink of falling into a repeating pattern. Her mother, Isra was married off to a man almost twice her age and had to move to the land of dreams, America, almost overnight. All that Deya remembers is a mother who was almost always sad. She has some happy memories though, mostly of her mother reading aloud to her.

Isra had already followed the path of most Palestinian women, she was handed over a dose of reality by her mother before the wedding,

“Isra cleared her throat. “But Mama, what about love?”
Mama glared at her through the steam. “What about it?”
“I’ve always wanted to fall in love.”
“Fall in love? What are you saying? Did I raise a sharmouta?”
“No . . . no . . .” Isra hesitated. “But what if the suitor and I don’t love each other?”
“Love each other? What does love have to do with marriage? You think your father and I love each other?”
Isra’s eyes shifted to the ground. “I thought you must, a little.”

“Mama sighed. “Soon you’ll learn that there’s no room for love in a woman’s life. There’s only one thing you’ll need, and that’s sabr, patience.”

All that Fardeen, her mother in law wants from her is a set of grandsons. Her only respite is Sarah, her twelve year old sister in law. The spark of rebellious fire in Sarah is what sustains Isra through the few years of marriage and four daughters.

As Deya goes through the process of being shown to a prospective groom, she is also struggling to come to terms with questions that has haunted her throughout. As she is succumbing to pressure, a mysterious woman appears at their door step and drops a letter for her. What follows forces her to finally confront the truth about her parents and her own choices.

In the background is the story of women almost everywhere. Of being there for their men, cooking, cleaning, bringing up kids, toiling till the end of their lives. Especially of Arab women irrespective of where in the world they are. Being beaten up is taken in their stride. Most of them who are brought up in traditional manner cannot even find anything wrong with it. The conditioning is to believe that they must have done something to welcome it. For a man can never be wrong. And a woman can never question him because ‘a woman is no man.’

The author, Etaf Rum is Palestinian American. Having grown up in Brooklyn herself, what she must have seen around her must have been something very similar. In her interview here, she mentions how she had to write about the abuse in spite of the knowledge that she might be opening up a can of worms among her community. She was married after high school, had her daughter at eighteen and a son two years later. Maybe it is autobiographical in nature in that the feelings, the angst, the inner struggles of each woman is brought out so poignantly, at times it is gut wrenching. Our hearts go out to each of them, even Fardeena. What she has gone through is what makes her behave so, and she doesn’t even for a moment believe that this is a cycle that can be broken.

The most beautiful part of the story is the love for books shared by Isra, Sarah and then Deya. ‘Thousand and One Nights,’ ‘A Tree Grows in Brooklyn,’ ‘Anna Karenina,’ ‘Bell Jar,’ ‘The Handmaid’s Tale,’ even ‘Dr.Seuss,’ gives them joy, solace, an escape from reality, and maybe redemption itself. The choice is theirs to make and each of them do it in their own way.

The women / girls are sure to tug at the string of your hearts which in all probability might still be roaming around between the kitchen and basement of that Brooklyn apartment.

Tags: A Woman Is No Man, Etaf Rum, Palestinian Stories, Women’s stories from around the world

The only resolution at the beginning of the year was to keep a tab on the books that I read in 2020. Let’s say I’ve accepted the meaninglessness of making up my mind to do something from the first of a particular year, when you could actually do that any time of the year. Reading, or keeping count of the books you read is however different. You need a timeframe and when else but the start of an year to do so. No targets, though. Will read when I feel like it and what fancies my mood and my mind.

The first one was  ‘A Teaspoon of Earth and Sea’ by Dina Nayeri. Of growing up in Iran post the coup. Of a lost twin and a disappeared mother, of love, friendship, sisterhood, motherhood. Of patriarchy, betrayal , survival.

The second one came through Twitter. The place has become a treasure trove of book recommendations of all kinds. The author, Sarah Ladipo Manyika seem to have transferred her nostalgia and longing for Lagos and Jos where she grew up, into her protagonist, Dr. Morayo.

Nigerian by birth, having lived in several places across the world with her once husband, who was a diplomat, she is soon turning seventy five. After separation, she had lived her life as an English professor and she currently resides in her rent controlled apartment in San Francisco.   She lives life on her own terms which means totally uncharacteristic of a woman of her age, or as the world would expect her to. A characteristic pirouette in the bathroom results in a broken hip and she finds herself in a rehabilitation home.

More of a novella, than a novel, the story introduces us to some of the people who walks in and out of her life. You might feel nothing much happens, but in very few words, the author takes us through the lives of a number of characters. And that exactly is the charm of this short read. Each character stays with you, who they are is brought out in very few words. And the thread that runs through each of them is the doctor who influences their life one way or the other. No one can escape her charm and no one can stop her from what she wants to do.

A thoroughly captivating read, and a character that I would love to evolve into, in real life.

Tags: books on Nigeria, Like a Mule bringing ice cream to the sun, Sarah Ladipo Manyika